Our mission is to improve the quality of life through educating youth and adults in a natural setting. 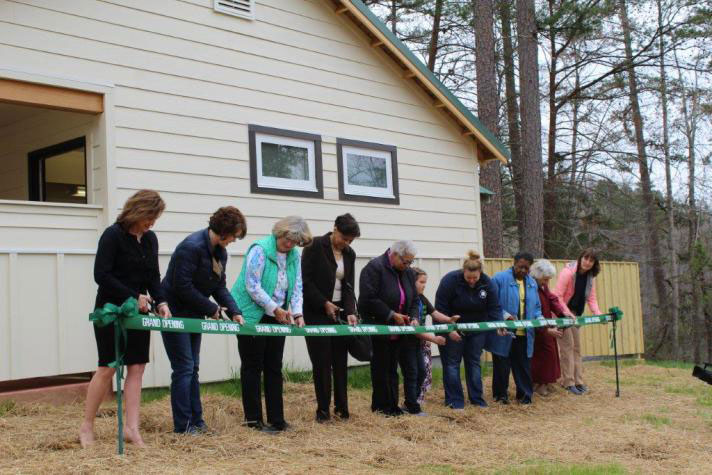 On March 30, 2017, the Holiday Lake 4-H Educational Center celebrated its 75th Anniversary along with the opening of the new Girls’ Bathhouse. The celebration was open to all, especially those who had camped at the Center or participated in any of its programs. It was a momentous occasion and everyone enjoyed their time together.

Preston Willson, CEO and President of the 4-H Center, called the celebration to order and thanked many of the donors who made the construction of the bathhouse possible. The bathhouse fundraising campaign began last spring with asking for donations from our biggest supporters.  100% of the 4-H Center employees donated to the cause, and during the summer, the 17 counties and 2 cities the 4-H Center serves, participated in a “Pennies for Potties” campaign. A thunderous applause rang out when he spoke the words, “It is paid for.” He then turned the mic over to Shirley Walton who came to her first year of camp as an Extension Agent in the 1970s. She talked about the memories the girls had of the original bathhouse and how the 4-H Center affects all the senses, from the sound of tree frogs to the fresh smell of nature. Many people murmured in agreement, as they recalled their own memories of the 4-H Center.  After reminding people how important the 4-H Center is and what it means to the hundreds of thousands of people who have been here over the past 75 years, she introduced the Ribbon Cutters. Many generations were represented during the cutting of the ribbon, from a camper in the 1940s, to a camper who will be coming to her first week of Junior Camp this year and a 3-year-old who represents the future of 4-H Camping. 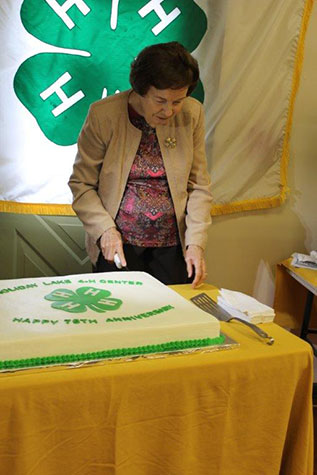 Following the ribbon cutting, people were invited to walk through the new bathhouse to see the major changes and improvements that had been made. After everyone toured the bathhouse, lunch was served in the Dining Hall. On display was a slide show of pictures from different times at the 4-H Center. The 4-H Center has gone through some major renovations in 75 years, but the purpose still remains the same; we are here for the kids. During lunch, a representative from Delegate Matt Farris’s office presented the 4-H Center with a Resolution for its 75th Anniversary, a beautiful cake was served, which was made especially for the occasion and people from each decade of camping shared a memory or two of their time at camp.

The day was a success! Generations of campers and participants were brought together by their love of camp. 75 years from now, who knows what buildings will be renovated, what new memories will be made, and who will be affected by Holiday Lake 4-H camp.

Holiday Lake 4-H Educational Center's mission is to improve the quality of life through educating youth and adults in a natural setting.